Our Learning for AUTUMN 2

What we will be learning in Autumn 2:

Geography - Where in the world is India?

The Lion, The Witch and The Wardrobe by C. S. Lewis 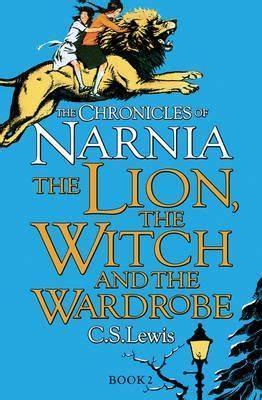 Achievers of the Week - Seb and Renee

Reader of the Week-

Mathematician of the Term - Troy

Reader of the Term - Oliver

What a lovely Christmas Week we have had! We've made Christmas decorations and card; we cheered Miss van de Sleigh to victory in the Reindeer Racing; we've completed Mr Wilkinson's Christmas Quiz; and we've danced our hearts out at the Christmas Party!

Miss van de Stouwe is so proud of the hard work the children have put in this term. She and Miss Fitzgibbon would like to wish all the families of 4S a wonderful, peaceful and restful holiday. 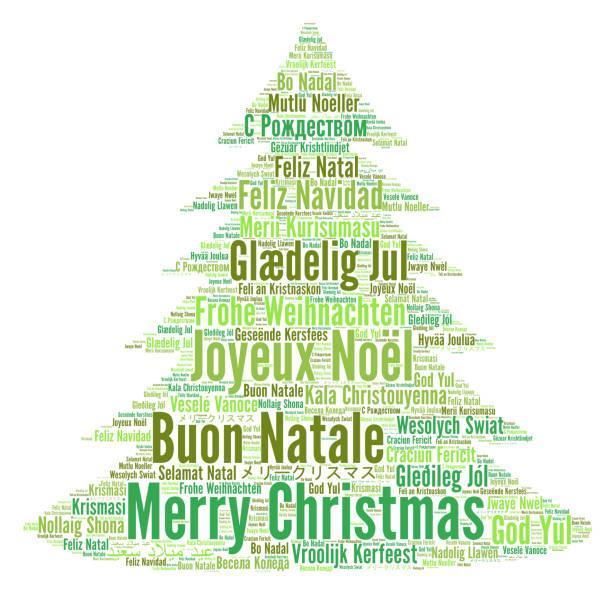 Achievers of the Week: Lucas, Hamid and Jason

Reader of the Week: Lucie

4S and 4H have put on super performances this week for the school and families. Miss van de Stouwe and Mrs Holmes are extremely proud of the hard work the classes have put in to get ready. Thank you to Mr Tebbutt and Mrs Campbell for organising the songs and musical performances. Another big thank you to all Parents and Carers for supporting their child with the songs and poems.

Achievers of the Week: Freddie, Troy and Liz

Reader of the Week: Myah

A big well done to all in 4S for completing their assessments this week! Everyone has worked extremely hard to show off the knowledge they have learnt in Year 4 so far.  As well as this and as part of our R.E. curriculum, we had visitors in to teach us about the Baha'i' faith. It was interesting to learn about their beliefs in all religions being of one God. In Science, we have used our knowledge of changing states and applied it to the water cycle. We learned that there are 4 stages to the water cycle: accumulation, evaporation, condensation and precipitation. Take a look at Freddie's, Myah's and Liz's work to learn more: 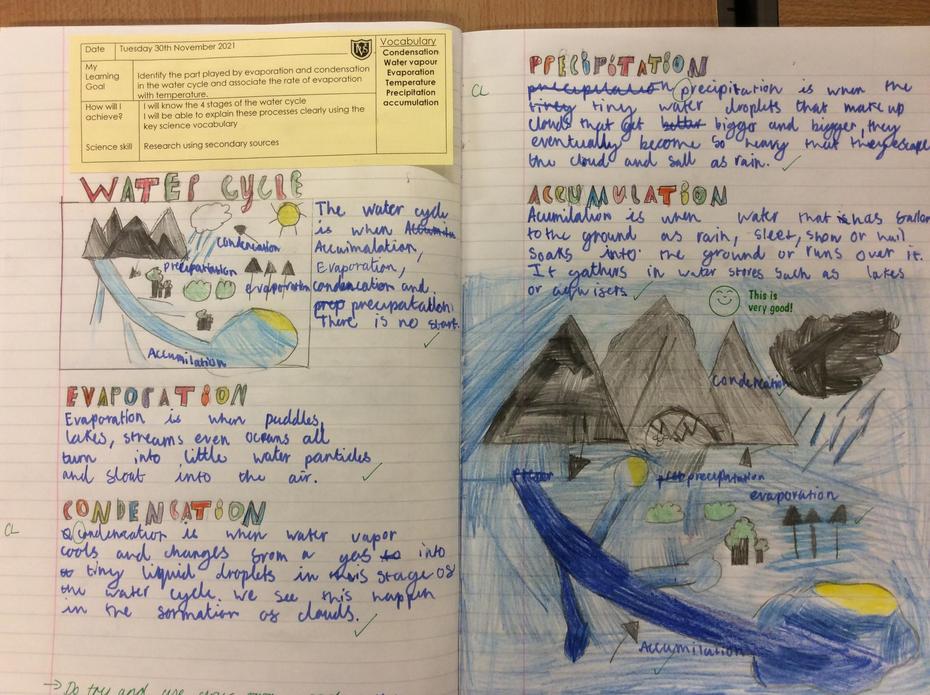 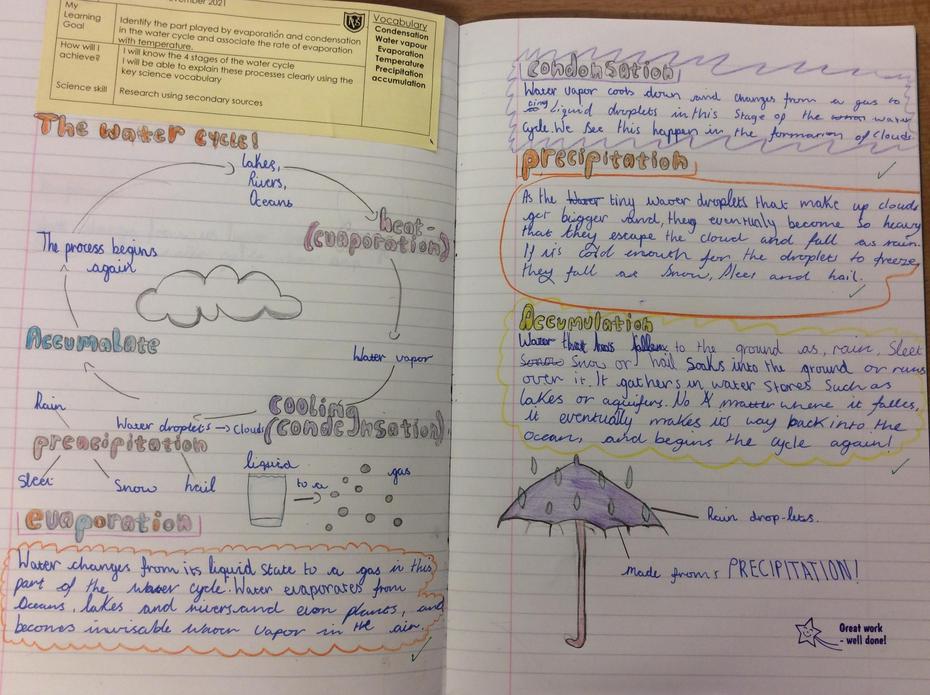 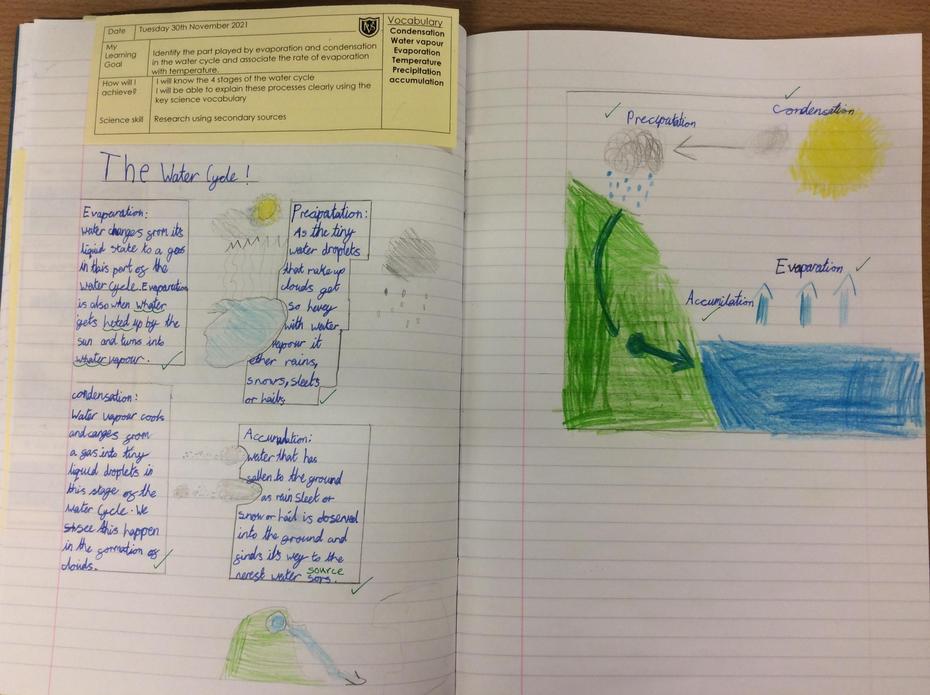 Reader of the Week: Seb

Thank you to all who took part in our TT Rock Stars battle against 4H. Unfortunately, 4H pipped us to the post but well done to 4S for getting a whopping 13,335 correct answers in a week! 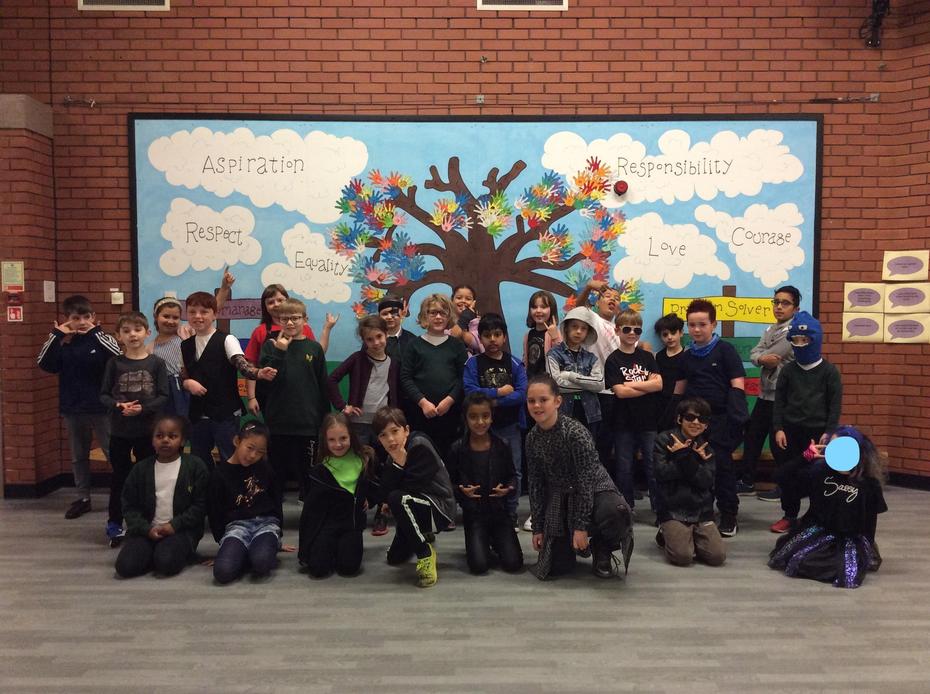 As well as enjoying TT Rock Stars day, we have been doing lots of exciting work this week. In maths, we have looked at multiplying and dividing by 10 and 100 and by 0 and 1. In RE, we had some fantastic discussions around Hinduism and their beliefs of reincarnation. We made our own version of snakes and ladders to help us understand how good karma and bad karma can alter a Hindu's life. If you could be born again as an animal, what would you be? We also created some snazzy-jazzy double pages in Geography where we compared the capital cities of the UK and India (London and New Delhi). Finally, in English, we used our knowledge of expanded noun phrases and punctuation for direct speech to create a description of the Royal Tea-Taster from Cloud Tea Monkeys and a conversation between him and the main character, Tashi. Have a read through Mila's, Frank's and Phoebe's work: 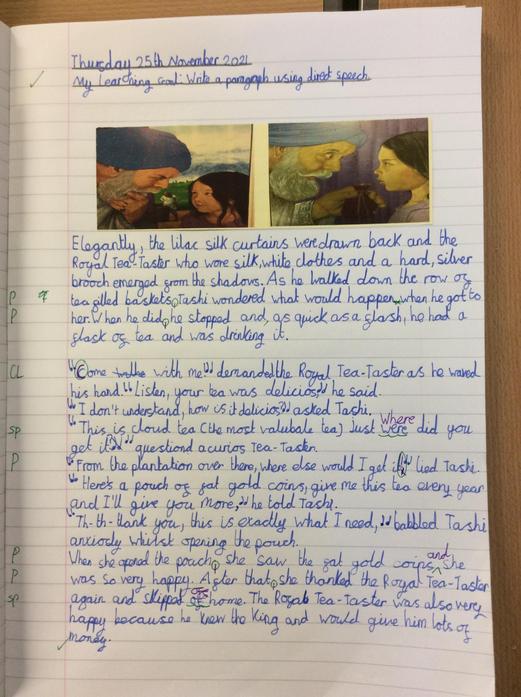 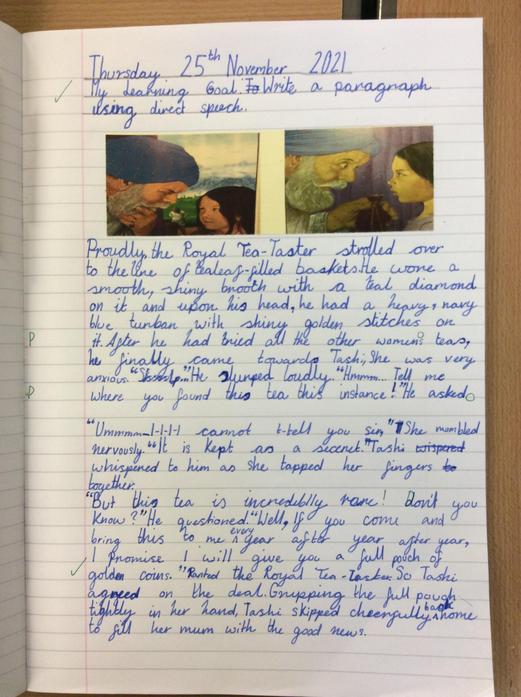 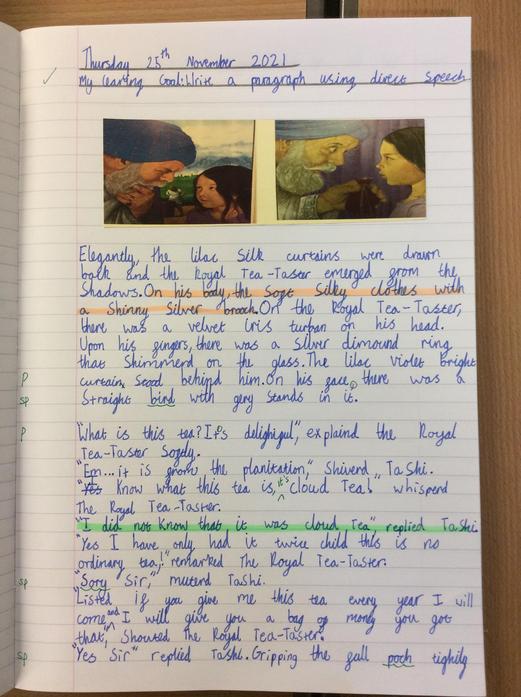 Achievers of the Week: Lucie and Nicole

Reader of the Week: Peter

We have been looking at Perimeter (the measure around the outside of a closed shape) in Maths this week, which was a little tricky! Have a look at the pictures of us drawing shapes to a specific perimeter below. In English, we began looking at the book 'Cloud Tea Monkeys' and started building a character description using expanded noun phrases and fronted adverbials for the character 'Royal Tea-Taster'. For Geography, we looked at the different climate zones of the UK and India, learning about the Temperate, Tropical and Arid climates. We also began preparations for the Christmas Concert, which we are all excited about!

Achievers of the Week: Harry, Darcy and Peter

Reader of the Week: Casper

This week the whole school has been focusing on gender equality. In Year 4, we have been looking at a variety of people and ways in which genders have been represented, looking at things we can change for everything to be accessible to all. We kicked off the week looking at scenes from the new Cinderella movie (Amazon Prime). In it, we saw our heroine not give up her dream of being a dressmaker for a prince. We used this idea to help us alter the traditional tale 'Sleeping Beauty'. We decided that Aurora was not going to fall for Maleficent's trick and would defeat the evil fairy without relying on a prince. Take a look at Renee's and Peter's story: 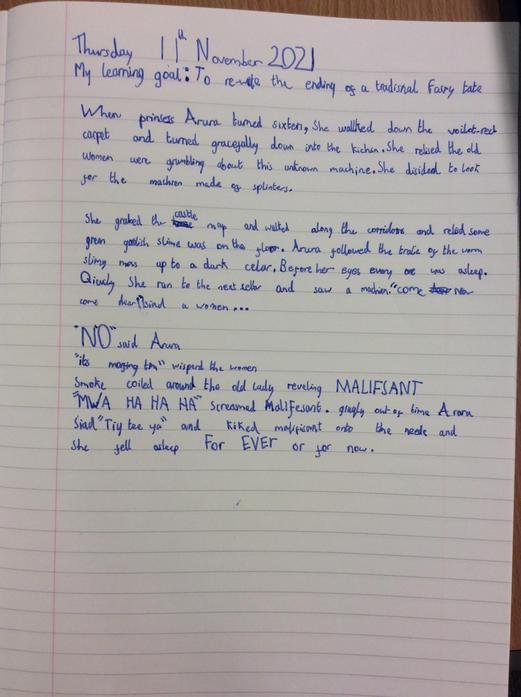 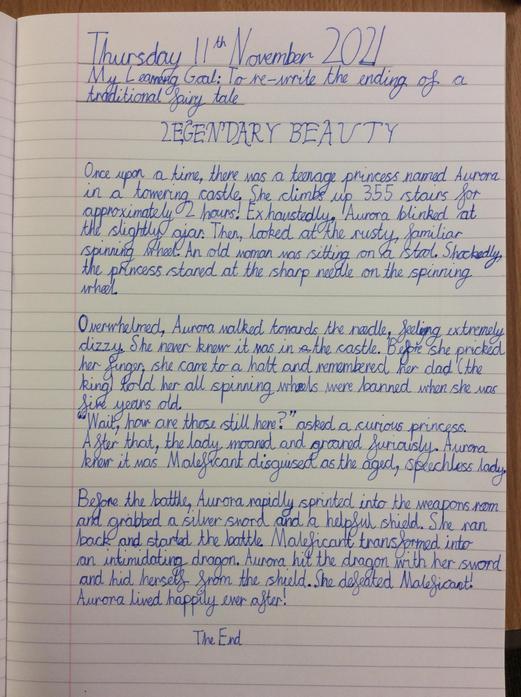 As well as putting a twist on traditional tales, we also learned about the Victorian author: Elizabeth Gaskell. At the beginning of the week, we used our research skills to learn about who she was and why she is important to Manchester. On Friday, we made a trip to the Elizabeth Gaskell House in town. We had a fantastic morning learning about life for Victorian families and we got to role play (with some costumes!). What did you find most interesting about Elizabeth Gaskell, her house and her life?

Thank you for all your hard work about Boudicca. We enjoyed listening to diary entries written as Boudicca, watching presentations about her, taking part in quizzes and we even made a gallery of all the wonderful illustrations that had been done!

Achievers of the Week: Casper and Sara

...and we're back! 4S have gotten stuck into their work this week. In Maths, we have continued our work in subtraction, ending with the tricky task of using rounding to estimate calculations. For English, we looked at using subordinate clauses to describe a scene from 'Into the Forest'. Evaporation was our focus in Science and we looked at how a beaker of water evaporates (turns from a liquid into a gas) over 24 hours within the classroom. To celebrate Diwali, we looked at the story of Rama and Sita and began making our own Diwali paper lanterns (which will be finished next week!). Finally, in Geography, we began our India topic by looking at where in the world India is, using our knowledge of the equator and hemispheres to locate the country on a world map. Take a look at Peter's, Alaiyah's and Darcy's work: 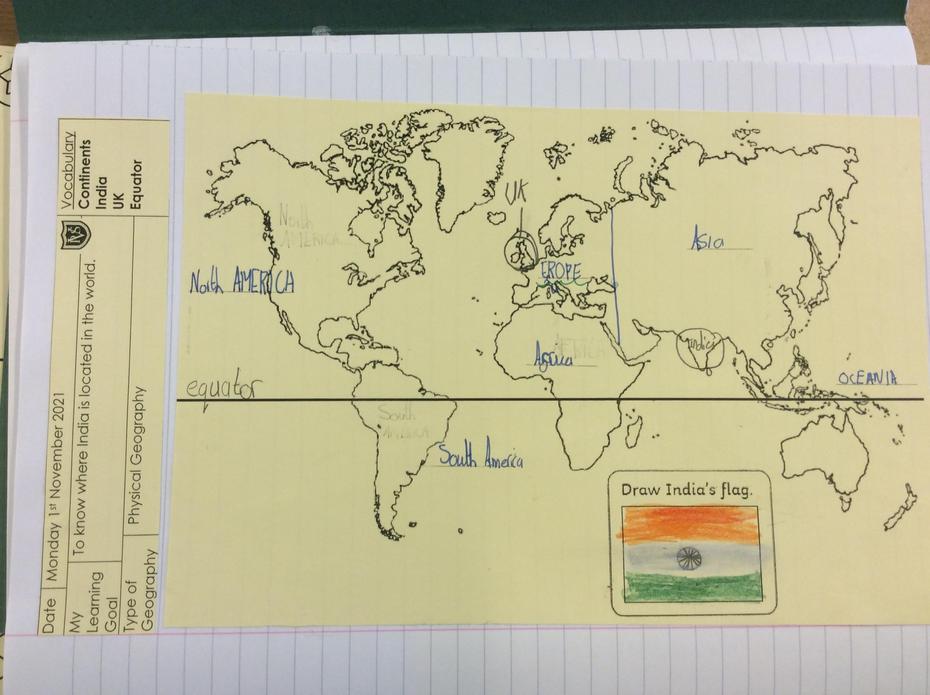 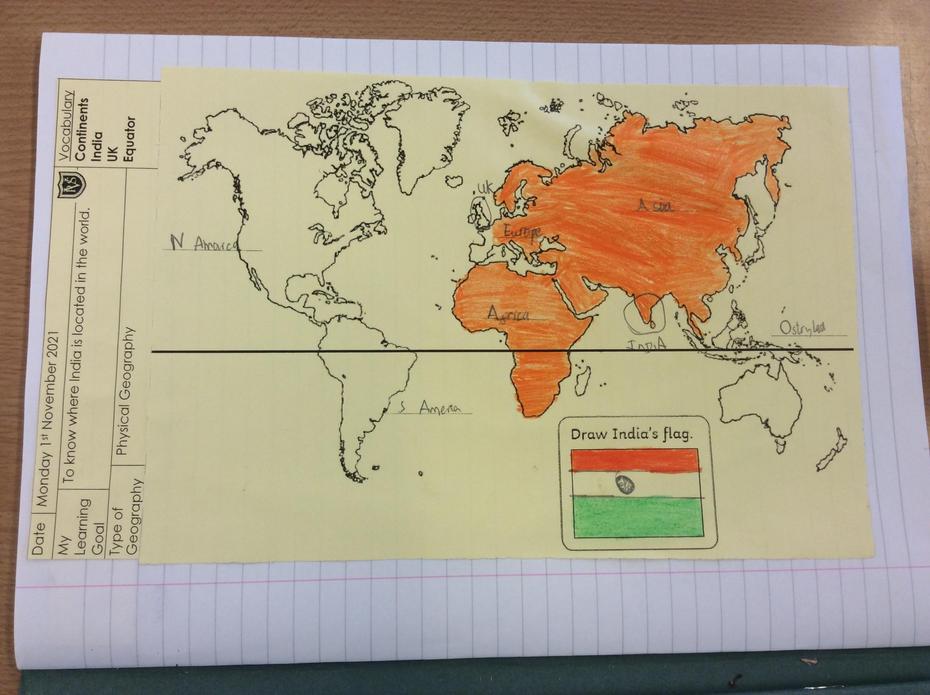 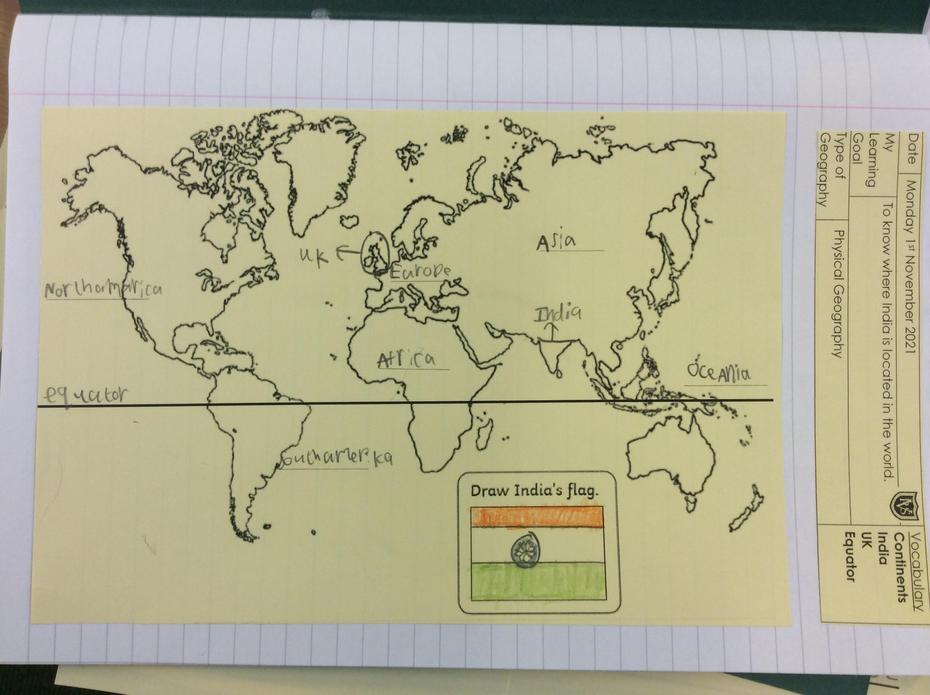